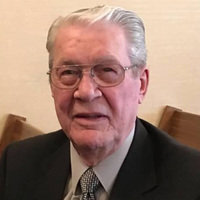 Roger Roy Tibke, 94, died peacefully on Wednesday, April 22, 2020, at the Dougherty Hospice House in Sioux Falls, SD.  There will be a private service, with a celebration of life gathering at a later date.

Roger Roy Tibke (Pete) was born on March 7, 1926 in Carson, ND to Rudolph and Flossie (Brink) Tibke.  Roger and his 7 brothers and 3 sisters grew up on a farm around Carson ND.  After his graduation he enlisted in the Navy and served from May 1944 to February 1946.  After the service he worked with his brother on farms in Bryant SD area till he moved to Sioux Falls and worked at John Morrell Company.  He retired after working there for 37 years.

He met his partner of nearly 55 years, Lois Jean Donley at the Arkota Ballroom in Sioux Falls and they were united in marriage in Luverne, MN on August 6, 1949.  They made their home in Sioux Falls, SD where he and Lois raised their 6 children.  He took great pride in his home and in his family.  He had a gift of growing things.  Over the years he had a large vegetable garden that later he turned into a beautiful flower garden.

Roger enjoyed all types of sports.  He coached baseball and softball when his children were younger and enjoyed watching them compete throughout their high school years.  He also attended sporting events for his grandchildren and great grandchildren.

Roger loved to play cards throughout his entire life.  He also enjoyed playing pool and playing cards at the DAV and also with his neighbors at Sunny Crest.

He was a member of the Westminster Presbyterian Church, the VFW, American Legion, and the DAV.